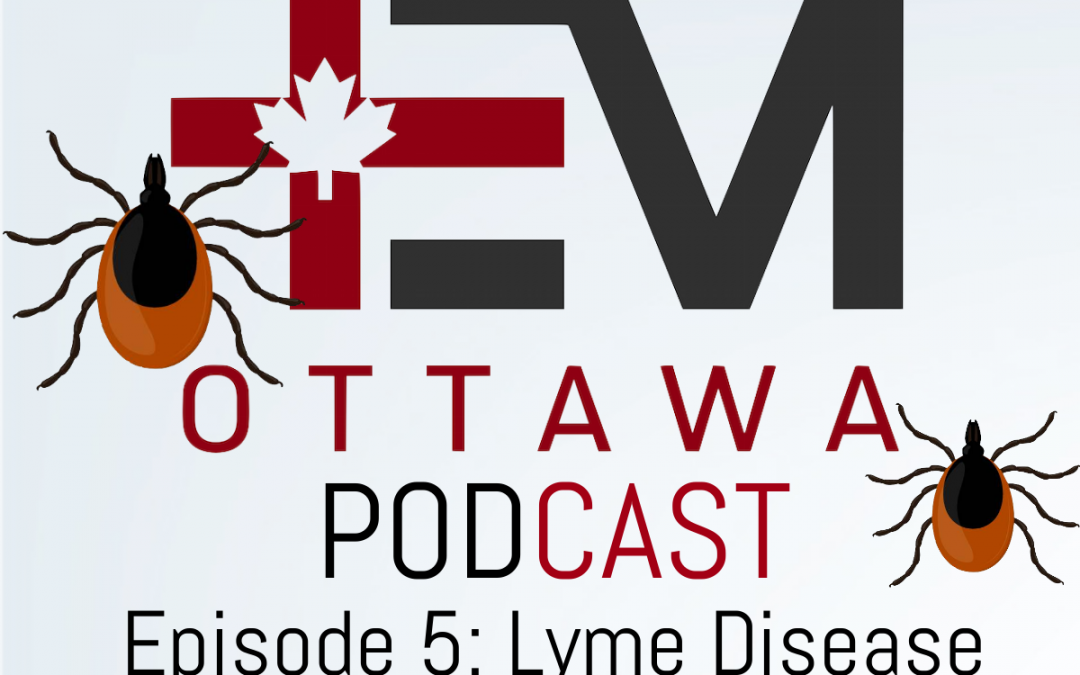 In part 1 of our 2-part series on Tick-borne diseases, Dr. Rajiv Thavanathan interviews Dr. Mikki McGuinty, an infectious disease clinician-scientist. This episode covers nuances of lyme disease with relevance to the front line provider. For a basic review of the disease and pathophysiology, we suggest our previous posts on lyme disease, vector borne illnesses part I and part II.

Common. Five years ago, it would be incredibly rare to see a case of locally acquired Lyme disease in Ottawa. They were seen in Kingston often, but now we’re seeing more and more cases in Ottawa. In the province of Ontario in 2017, we documented over 1000 cases, and numbers have been rising since. However, four years prior, we were roughly seeing 300-cases per year. This isn’t just due to under recognition, there’s more Lyme carrying ticks. Reasons for this include complex dynamics of climate change, as well as habitat change for typical reservoir animals of these diseases. Overall, the IDSA threshold for an endemic area is 20% or more of ticks infected with Borrelia Burgdorferi.

Do we need to identify the tick?

The bottom line: no. In Dr. McGuinty’s experience, a patient bringing in a suspected tick in Ottawa hasn’t helped. Most tick-borne illnesses diagnosed do not have a tick identified. Physicians are generally not any more skilled than the public in comparing the identified tick to those found in a textbook or on the internet.

However, if you live in a region that has multiple infectious ticks (i.e. lone star ticks or dog ticks) that can carry different diseases than in our local Ontario region, there’s more value to identification to target treatment. In Ontario, we assume it’s an Ixodes tick.

There are lots of good studies showing that borrelia burgdorferi is NOT transmitted during the first 24-hours of attachment. However, the vast majority of those who have a tic-borne illness don’t recall having a Tic attached. And just because you’re seeing a patient with a tick attached doesn’t mean that same patient didn’t have three ticks on them earlier and this is the only one left. Therefore, our local practice is treating regardless of the presumed attachment duration.

Tick engorgement is also notoriously unreliable to the untrained eye. Albeit if you’re an ER or family physician living in New York State, you might have more experience with this.

A common clinical miss for Lyme disease is failing to recognize disseminated (or secondary) Lyme. Often called about a patient febrile with a weird rash. And at this point it’s disseminated with different stages of bullseye rashes. It’s not just a simple or single lesion.

Regarding the timing of erythema migrans, its variable, with some lesions showing within 2-3 days of exposure, and some as late as 30-days after. The appearance can also vary amongst patients significantly. While many patients get the classic targetoid lesion with the central bite, some get erythema throughout. Therefore, if a patient has a tick exposure, and you think it’s a possibility the rash could be migrans, it’s best to err on the side of caution.

Clinical pearl: it should never be painful. (It should also never be pruritic, but Dr. Mcguinty has seen a few cases with associated pruritus).

IDSA Guidelines: 200mg of doxycycline x 1 dose (or 4.4mg/kg in pediatrics), beginning within 72-hours of tick removal, for an Ixodes tick, in an edemic area, where the Tick was on for 36-hours or more.

However, regarding the timing, you should use your clinical judgement.

I.e., a patient presenting at the 84-hour mark post-tick removal might still benefit from prophylaxis, whereas a patient with a tick removed one week ago will not. There’s good evidence that delayed prophylaxis doesn’t mitigate the presence of Lyme disease.

In acute Lyme disease with erythema migrans, there’s typically no utility in sending serology for Lyme. It takes at least 3-weeks, and up to 6-weeks, to develop antibodies to Borrelia. And depending on your institution’s lab, it takes an average of 1-week for serology to come back.

Should you refer every patient treated for Lyme disease to ID?

Bottom line: No. Unless you feel uncomfortable or have questions regarding the case. Almost everyone with acute Lyme disease will improve, with outpatient wait times to see an ID specialist are typically ≥ 2-months.

Steroids in the setting of a facial nerve palsy with suspected Lyme disease: